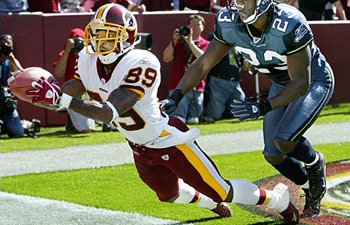 According to the source, Moss will receive a $5 million signing bonus and $6 million total in guarantees.

The 32-year-old Moss became a free agent as a result of a restructured contract he signed with the Redskins in 2009 that included a clause that said his contract would automatically void five days after Super Bowl XLV.

Moss had a career-high 93 receptions in 2010, his first season with coach Mike Shanahan. He also had his fourth career 1,000-yard season (1,115) and six touchdowns. He has led the team in yards receiving every year he’s been in Washington.

Moss was selected 16th overall by the New York Jets in the 2001 draft. The Redskins acquired him in a trade that sent Laveranues Coles to New York in the 2005 offseason.Source ESPN