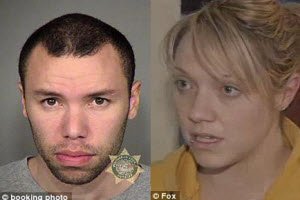 A mad boyfriend allegedly placed a series of fake adverts on Craigslist that appeared to be from his pregnant ex-girlfriend asking men for se*. Andre Flom, 31, of Portland, Oregon, put up ads with her number and address – and up to 20 men would arrive at her home for se*, police said.

Postings under the name of Catlin Moser, 29, said ‘hit me up – I’m super ho***’ and that she wanted ‘guys to take turns giving it to me good’.

‘Having a party tonight at my house: encourage single guys to come through, lots of beer and single women, here is a recent pic of me, my name’s Catlin, let’s go boys’

‘Hey, so I’m at home bored, lookin for a guy, or guys to take turns givin it to me good”

The posts also asked people to remove a ja*anese maple tree and a play structure from her garden, reported the Smoking Gun website.

‘He was posting my name, my phone number and my address on Craigslist for really obscene se* parties,’

I was having men showing up at my house all hours of the night.’ He even allegedly posted the contact details of Ms Moser’s mother, who said she would get around 100 obscene text messages in five minutes.

The kinds of things that were being said were pretty obscene,’ the mother told CBS affiliate KVAL. ‘He’d set up times for them to come over.’

It began in October after Flom was convicted of domestic violence and more than 35 adverts were posted on the listings website, police said.

Flom was convicted of strangling Ms Moser, who has a two-year-old son, last autumn and she won a restraining order against him. One of the ads included her address, saying:

Another said she was ‘sitting at home bored’ wanting men to

‘give it to me good’ and was inviting people who ‘want to get a little dirty’.

Investigators subpoenaed Craigslist to give them records that showed nearly all of the fake adverts came from the same network location.

In a twist, investigators traced this to Flom’s next-door neighbour. But it turned out the man had an unsecured wireless router in his house.

Police raided Flom’s home on Tuesday and took away a computer, modem and mobile phones, reported the Smoking Gun.
Flom was charged with computer crime and identi*y theft and is being held in Multnomah County jail in lieu of posting a $30,000 bond

This is so foul.