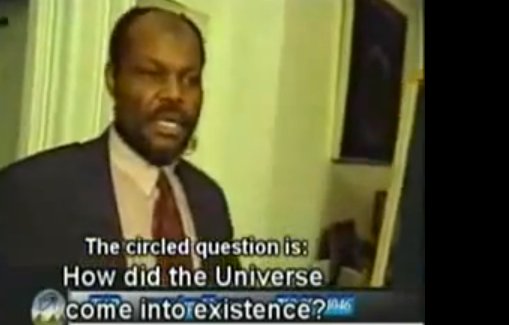 Did you see the movie Interstellar and wondered more about the scientist actor David Oyelowo played in the flick that has amassed a billion in the box offices thus far.

His name is Dr.Gabriel Oyibo and he solved Einstein’s Theory of Relativity. I bet your history class never taught you that.

The white scientific community tried to question his findings and wrote articles like “Dr Gabriel Oyibo: Genius or Madman?” :But that is what they do; Try to discredit an Original Man when re-introduces to them something that was already invented by the ancient Black man.

New York, NY — Einstein would have been proud to learn that Nobel Prize officials have nominated for a
third time Professor Gabriel Oyibo in physics for proving Einstein’s most famous theory (E = MC2). Professor Oyibo, a Nigerian mathematician and physicist living on Long Island, New York, has discovered the Grand Unified Field Theory or the Theory of Everything (TOE).

In essence, he has taken the work of Einstein to the next level proving the theory with sound mathematical equation. The work provides solution to the unified force field extending the work of Newton, Einstein and others, revising all of science from the elementary to university school level.

Of all the scientists in the world, Professor Oyibo has uniquely pulled together physic theories involving gravitational, electromagnetic, strong and weak forces as well as other forces that are currently unknown. No one has ever been able to unequivocally solve the theory until the present day work of Professor Oyibo. Recognizing the significance of this work, Professor Oyibo was initially nominated for the Nobel Prize in 2002 and 2003 and did not win. Known worldwide in his field and the recipient of countless awards, Professor Oyibo has been once again nominated this year for his work.

Crowning an incredible career which has included problem solving for NASA—where their experts at MIT and other elite universities had deemed “impossible to solve” —Professor Oyibo initially entered his professional career by obtaining his PhD in Aeronautics and Mathematics from Rensselaer Polytechnic Institute in Troy, New York. There he worked for four years on NASA/AFOSR sponsored research and made several contributions in aircraft design, aerodynamics, aeroelasticity and mathematics. He taught several courses as well. Professor Oyibo’s fascinating and most acclaimed career is highlighted with countless achievements including:

< Introduced the concept of Affine Transformations into the field of aeroelasticity, aeronautics, which is used by prominent researchers and aircraft companies around the world.

< Professor Oyibo has solved the toughest problems in at least three disciplines, Navier-Stokes Equations (Mathematics); Turbulence ( Aeronautics); The Theory of Everything or the Unified Field Theory (Mathematical Physics.) Gij, j = 0

Discovered that hydrogen is the only building block of the entire universe , there is ONLY ONE ELEMENT
as opposed to the current, general belief that there are 118 ELEMENTS that form the basis of science

< Has been nominated for the Presidential Medal of Science and the Nobel Prize awards. These nominations have been supported by distinguished professors from prestigious universities such as Massachusetts Institute of Technology (MIT). The Cambridge International Biographical Centre

(IBC-England) has conferred the following honors on Professor Oyibo the International Personalty of the Year 2000-2001; 2000 Outstanding Scientist for the 21st Century; and among one of the One Hundred Most Outstanding Citizens of the World. Referenced in: Who’s Who in America ;Who’s Who in Science and Engineering; Who’s Who in the World.

< Received the Key to Miami Dade County and honored by the Miami Dade School Board, October 2002; Honored by the New York City Council, and the Huntington, N Y, Town Council, for his work and discoveries .Holds the AAA Journal worldwide publication record for 1983.

< Selected by NATO/AGAR as a contributor to their unsteady transonic aerodynamic research.

< Consultant to half a dozen aerospace companies around the world, the United States and the United Nations.

< Recipient of several professional and scientific awards including the Associate Fellow Award from the American Institute of Aeronautics and Astronautics (AAA).

< Using the newly developed group theory methods he generalized and proved Einstein=s theorem (theory) in an article entitled GENERALIZED Mathematical Proof of Einstein’s Theory Using A New Group Theory which was published in a Russian and an American journal. This proof of Einstein’s theory has been recognized by the American Mathematical Society(AMS) in its Mathematical Reviews (ME) journal, MR 98e83007. .

He has discovered the Unified Field Theory or the Theory of Everything, the theory Albert Einstein searched for unsuccessfully most of his life, which he has published in the book entitled, Grand Unified [email protected] which has been recognized by the American Mathematical Society (AMS) and the European Mathematical Society(EMS).

Professor Oyibo has lectured widely on his discoveries and been interviewed on radio, television and print media. Editorial Board member “Nova Journal of Mathematics,Game Theory and Algebra”

Professor Oyibo has been involved in research and teaching at Polytechnic University beginning in 1986
serving as an Associate Professor of Aeronautics. He is currently a Professor of Mathematics and Mathematical Sciences at the OFAPPIT Institute of Technology and the University of Bridgeport.

As historically known, Einstein summarized his theory down to the acclaimed 2 E = MC . Professor Oyibo, in solving the theory, provides his solution in one equation where all logistics are keenly summarized and understood by the science world as: Gij, j = 0.

The characteristic device for the representations of all mathematical solutions- e.g. of Newton, Maxwell, Einstein, et.al.

So that where is called the proper time or space.

He also Discovered among many things that hydrogen is the only building block of the entire universe., it has been discovered through GAGUT that the Periodic Table of Elements has ONLY ONE ELEMENT as opposed to the current, general belief that there are 118 ELEMENTS that form the basis of science. GAGUT,therefore, changes all science as we know it.

Distinguished professors, such as Cambridge trained physicist Professor Joshua C. Anyiwo praise Professor Oyibo’s work as the “cleanest, most carefully articulated, most comprehensive and authentic presentation of a unifying theory of physics that I have ever encountered; and I have encountered quite a few of such works.”

Professor George Handelman, former head of the Mathematics Department at Brown University and the
Amos Eaton Professor of Mathematics ranks Professor Oyibo “among those who have made significant
contributions to the field, such as Lord Rayleigh, Werner Heisenberg, Sir Geoffery Taylor and Theodore von Karman.”

Additionally, Professor Edith Luchins, mathematics professor and an aide to Albert Einstein wrote, “The
most exciting contribution to me, personally, is Professor Oyibo’s formulation of Einstein’s Unified Field Theory… I am thrilled that Gabriel Oyibo was the first to complete the task that intrigued and challenged Einstein and many other luminaries in science. Moreover he did so in amathematically elegant manner.

Professor Oyibo’s contributions are extremely important, both theoretically and practically. They place him in the ranks of world class scientists. He is eminently qualified for the Nobel Prize in Physics.”

University (300); 3. MIT( 296); 4. SUNY Stony Brook (1, 070 ); 5. RPI ( 300); 6. NYU ( 300). “We the students and faculty, wish to express our desire to have Professor G.A. Oyibo, Professor of Mathematics and Nobel Prize nominee, give a lecture at our campus about the discovery of the Theory of Everything ( GAGUT- for which he has been nominated for the Nobel Prize.) We feel that a lecture and discussion about the scientific and social implications of this theory would be beneficial to our school by broadening our academic and social awareness.”