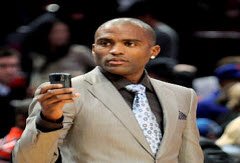 Cuttino Mobley has been retired from pro basketball since 2008. 3 years later seems like the perfect time to start a new business venture. Cuttino’s business of choice, medicinal marijuana.

In January of this year, Mobley was listed in docu*ents filed with the Rhode Island Department of Health as

“the sole financier for the Summit Medical Compassion Center,” a proposed medical marijuana dispensary to be located in Warwick, Rhode Island.”

Cat went to school at Rhode Island so I’m assuming that’s why he selected that state for the location. Well that and it’s one of the view that allow medical weed stores. But it won’t be as easy as it sounds for him to set up shop. First he actually has to obtain a license. From there, Rhode Island state law allows its Department of Health to authorize between one and three dispensaries. 18 license applications have already been filed.Source

I couldn’t think of a better business to invest your green in?