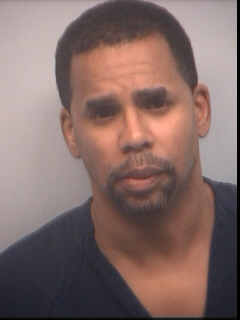 It’s been a rough week for Darien Long, the Atlanta mall cop who shot to fame after his videos of stun-gun rife confrontations with patrons went viral.

The so-called “Kick Ass” mall cop was arrested in Atlanta on Thursday night, Fox 5 Atlanta reports. According to police, Long faces battery charges after allegedly tackling a person at the Metro Mall in downtown Atlanta, where he works as property manager.

Police spokesman John Chafee told the station that Long said he’d warned the victim not to return to the mall, but he could not back up his claim.

WSB-TV reports that police reviewed video footage from the mall and determined that Long was the aggressor.

Long appeared before a judge Friday and was granted a $2,000 bond. He is scheduled to appear in court again April 4, according to a separate Fox 5 Atlanta report.

Earlier this week, Long told news organization Right This Minute that he had lost his job at the mall and that his last day would be March 31.

In a phone interview with The Huffington Post on Thursday afternoon, Long said that although he’d officially been let go because of declining revenues at the mall, he believes there were “political reasons” behind the loss of his job. Long claimed that his videos, which he filmed with a GoPro camera strapped to a bullet proof vest, made the Atlanta police look bad.