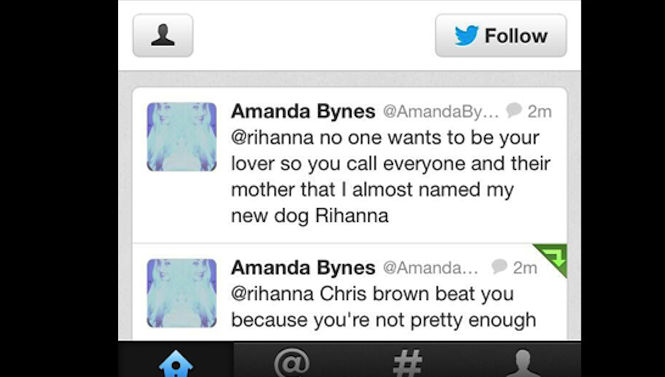 Amanda Bynes and Rihanna are attacking one another in this weeks newest Twitter feud. Out of the blue on Sunday, Amanda Bynes decided to attack Rihanna with the following tweet:

“@rihanna Chris Brown beat you because you’re not pretty enough.”

Shortly after the tweet was sent, Bynes went ahead and deleted her offensive and grating message but not before screen captures were obtained.

Rihanna for her part went on the offensive and sent out the following Twitter attack of her own:

“Ya see what happens when they cancel Intervention?”

Amanda may have deleted her first tweet, but she wasn’t going to sit by and take Rihanna’s response to her attack. Instead, Amanda Bynes tweets:

“@rihanna unlike ur fugly faced self I don’t do drugs! U need the intervention dog! I met ur ugly face in person! U aren’t pretty u know it!”

Apparently realizing that she didn’t really have an argument for attack Amanda Bynes removed her second tweet a short time later.

The Twitter feud is just yet another seeming part of the Amanda Bynes breakdown. The actress over the last year has been arrested on suspicion of DUI, has posted half nude photos of herself on Twitter, and has been attacked and supported by various members of the Hollywood community.

The earliest reports against Bynes claim she has been doing drugs and talking to herself while at the gym.

For her part, Amanda Bynes has remained vigilant in her own defense, claiming that she has not gone crazy and is simply living her own life as she sees fit.

Amanda Bynes continues to skate by for her actions, but she still faces an uphill legal battle that could help or her the actresses mental stability.

Do you think Amanda Bynes is actually crazy, or is she simply pulling the best performance art of her life?