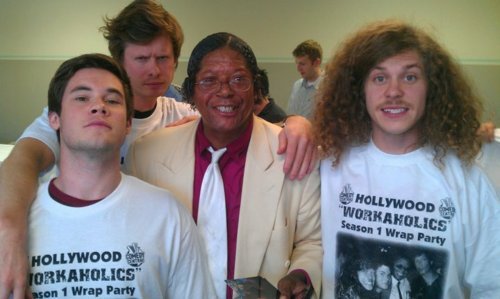 “Workaholics” fanatics have always loved Jet Set—the older guy in the TelAmeriCorp office who’s good for an utterly bizarre comment once every couple of episodes. Today, though, it seems that actor Jessie “Jet Set” Hudson has passed away.

Blake Anderson, Adam Devine, and a few other guys from the show have been Tweeting the news this afternoon. We have no idea yet what the cause of death is.

UPDATE: Jet Set died after suffering a heart attack on Dec. 13 in Pasadena, California. Via the Tampa Sentinel Bulletin:

According to family members, Jet Set, who lived in Pasadena, California, stopped by a convenience store close to midnight on December 13th.

His sister, Shirley Coleman, said Jet Set went into the store and purchased an Alka Seltzer, a bottle of water, and some milk.

“The clerk in the store said he was sweating really bad, and was in a hurry.

Ms. Coleman said when paramedics arrived on the scene minutes later, he was pronounced dead. Preliminary indications are Jet Set died of a heart attack. Via Brobible