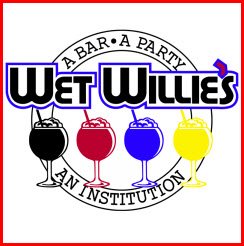 Depending on what day you went in Wet Willies last week during it’s 1st week grand opening you might of seen the who’s who of Atl in there. At the peak times the line to get in the bar was 45 minutes like you were trying to get in Vision’s night club back in the day. They sold out of food in the 1st two days of opening which was said to be 600 pds of chicken. So that should give you a clear picture of how many people came to Wet Willies. Even A.I made a appearance despite the media recently talking about his gambling problem’s he still was in there playing spades for 5k a hand #onlyinatl.

The waitresses are nice and nice looking the owner Carlos Emmons must of hand picked them. The food was good and the drinks all have the same amount of Grenadine liquor in them so it is basically about out personal preference.

Atlanta new night spots usually stay hot the for 6 months to a year before every one is on to the next one,but I can see Wet Willies being that spot to hit as long as it’s in business.

If your looking in to trying to open a Wet Willies in Atl Carlos got it on lock for the next 5 years and after that he can open 5 more. Wet Willies franchise costs 900k ,Lindbergh City Center is a good location but Atlantic Station would of been perfect.