Tobey Maguire is a Hollywood actor best known for his role in Spiderman that was a huge hit for years when it appeared. He’s also known as the film producer. He started his career back in 1989 and at first, he was landing only the supporting roles, but soon after he started targeting the lead roles and making significant success. The interesting thing about him is that his mother was only 18 when she gave birth to him, while his father was 20 at the time. His mom was involved in publicity, advertising and even acted a little, and later on managed him, helping him land his first roles.

So far, we’ve seen that he is pretty much down to earth and very modest, even though he’s making enormous amounts of money. His attitude that he simply wants to learn as much as he can, is something that we certainly appreciate about him. He is very approachable and eager to give his best no matter what he does.

The best movies he played in

While he was paid “only” four million for the first Spiderman movie, for Spiderman 2 he became wiser and a lot richer – he got $17.5 million a 5% back-end. The third Spiderman movie brought him $15 million and 7.5% back-end making him even richer than he was before. Not only that, but he also gave his voice for the video games with the same name. We guess a lot of kids wanted to be Spiderman as well, which certainly put a lot of money in his pockets as well. 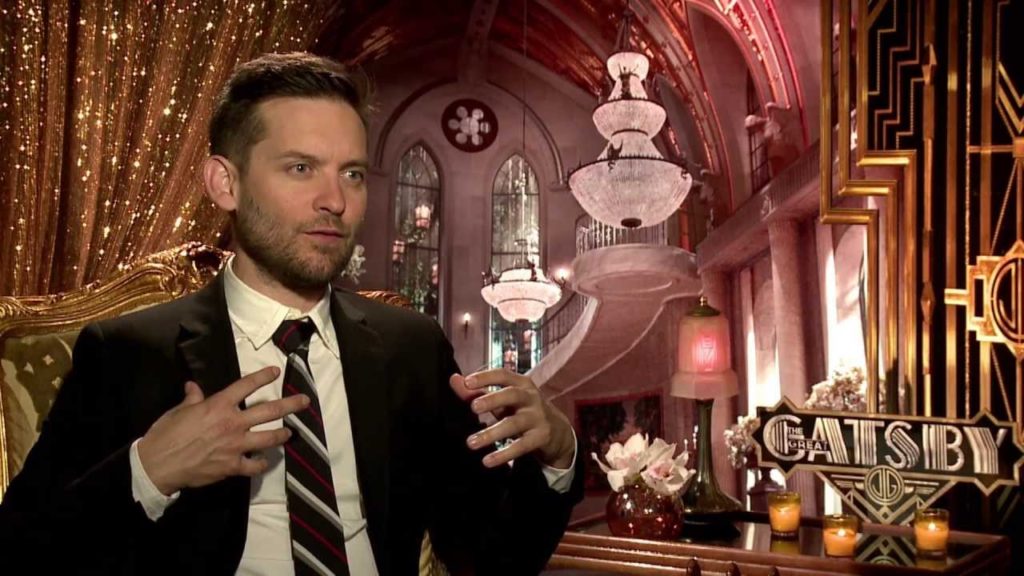 Even though he played a smaller role in the movie The Great Gatsby, it certainly enriched his pockets for a significant amount of money. The movie was a great success, earning more than $353 million across the globe. He’s also known by the roles in the TV show The Spoils of Babylon, Seabiscuit, Wonder Boys, The Cider House Rules and many others. His net worth at the moment is $75 million dollars. Pretty impressive, don’t you think?

Tobey started producing movies back in 2002 and he only continued making success after the success. He discovered that it is his passion and here are a few movies that he was part of: Whatever We Do, Country Strong, The Spoils of Babylon, Brittany runs a marathon, Boyz in the wood, The best of enemies, The violent heart and there are two movies announced for next year.

He is also known for his gambling issues. There was even a lawsuit involving a settlement that Toby had to pay. Maguire is very good at Texas Hold’Em and he won more than $300,000 in poker games in casinos in Los Angeles and New York. Toby is such a skilled poker player, that he even won the World Series of Poker. There is one information that he won more than $10 million through playing poker in numerous casinos. If you wish to try your luck, according to free bets UK it is important to choose the poker sites with a good reputation. That way, you will have the possibility of accessing unique promotions and exclusive offers, such as welcome bonuses, refunds of lost amounts, or gift bets. Look at the sports you are most interested in betting on and the top betting sites will have you covered. The top sports betting sites are often the most generous.

Even though fans were worried when they found out that he is gambling, as we saw, later on, he is pretty fine and we are happy about it. Even though he’s not acting actively lately, the projects he’s working on and the movies he is directing are definitely worth the attention and we’ve seen so far that he is one pretty talented guy. We hope he will stay on his winning streak and give the fans a lot of the movies to look forward to.

Toby is now laying low, spending time with his kids, working on producing movies and simply leading a life far from the spotlight as much as that is possible. He certainly made a splash after the Spider-Man movie and his engagement in other projects brought him a great profit, but probably not as big as his income during Spider-Man trilogy.

There are some rumors that Tobey was blacklisted in Hollywood after his Spider-Man 3 movie wasn’t received well by the audience. The viewers were angry because they thought he didn’t give his best as he should. This kind of hate by the viewers certainly affected his gambling addiction, making it probably worse.

His gambling addictions aside, Tobey turned out to be pretty wise. We’ve learned from his Spider-Man movies that our choices make us – no matter what’s going on, we always have a choice and we can always do it right. Great power also means having great responsibilities towards other people and that our power should be used to help other people instead of wasting it on the wrong things. It also thought that we should pursue our ambitions instead of focusing on love relationships. This is pretty good advice, and certainly something to think about.