This week’s riots in Baltimore have drawn many comparisons to the race-fueled protests of 1968, and Time magazine brings that idea home with its new cover.

The image reminds us that Baltimore — and cities across the US — still have not resolved some of the problems that sparked massive riots across the country 50 years ago.

“We never really recovered from the riots of 1968,” Baltimore City Council president Jack Young told Time. “Our infrastructure was destroyed: butcher shops, clothing stores, supermarkets, all destroyed for one reason or another.”

In April 1968 after Martin Luther King Jr.’s assassination, Baltimore residents rioted and looted businesses. Six people died, about 700 were injured, and about 1,000 businesses were looted, according to Time. The National Guard was called in to calm the situation.

Similar (albeit less violent) riots happened this week after the Monday funeral of 25-year-old Freddie Gray, who died of a spinal injury while in police custody. It is unclear what exactly happened while he was being transported in a police van after his arrest, but many protesters suspect that police brutality contributed to his death.

Rioters torched cars, looted convenience stores, and pelted cops with bricks, rocks, and bottles on Monday. The city instituted a curfew and called in the National Guard to diffuse the situation, and the city has calmed since then. 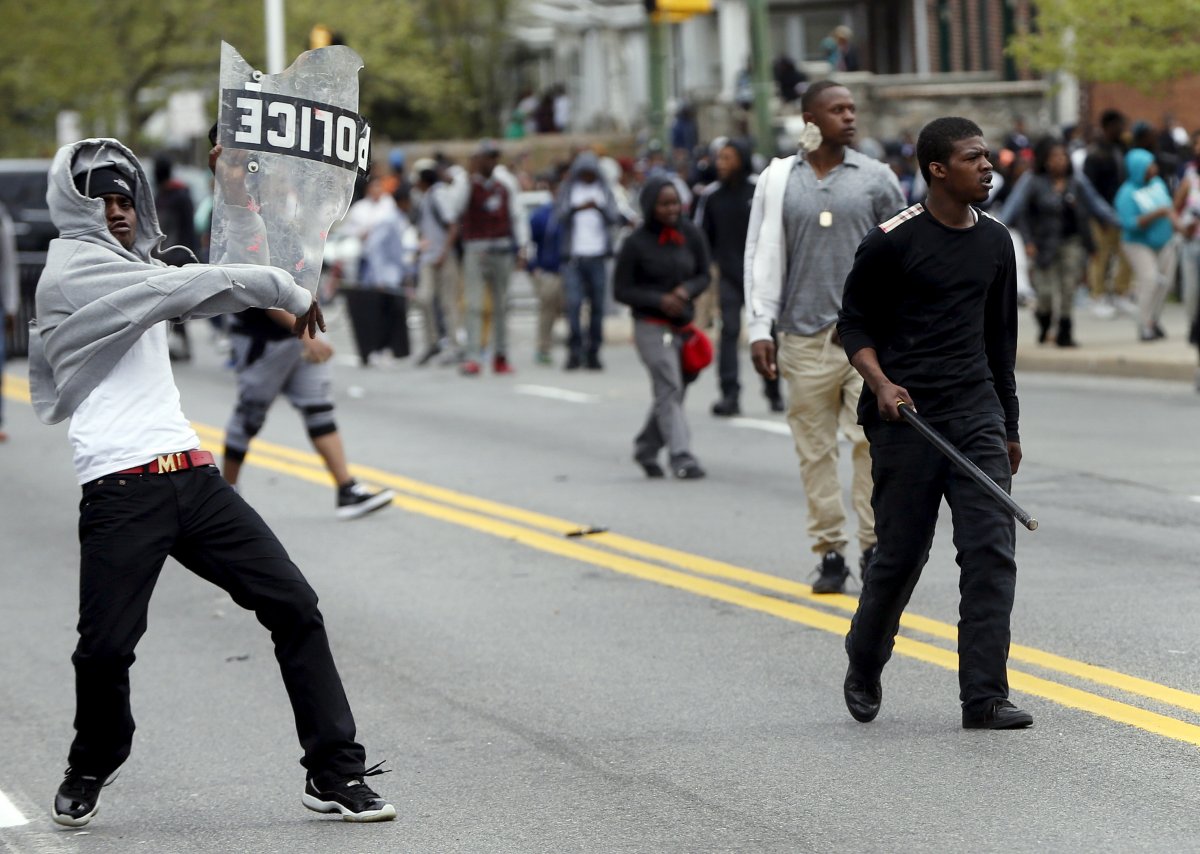 The 18-year-old pictured smashing a police car with a traffic cone, in one of the defining images of the Baltimore riots, is being held on half a million dollars’ bail and may face years in jail after his stepfather persuaded him to turn himself in to authorities.

Allen Bullock was charged with eight criminal counts, including rioting and malicious destruction of property, after arriving at Baltimore’s juvenile justice centre with his stepfather, Maurice Hawkins, who said he saw television footage of Bullock’s actions on Saturday.

Hawkins, 44, said Bullock had agreed to surrender to the police after being told by his stepfather the police would “find him, knock down our door and beat him” if he did not. “By turning himself in he also let me know he was growing as a man and he recognised what he did was wrong,” Hawkins said on Wednesday at his home in a low-income block in south Baltimore. “But they are making an example of him and it is not right.”

“As parents we wanted Allen to do the right thing,” said Bobbi Smallwood, Bullock’s mother, who wept and dabbed her eyes. “He was dead wrong and he does need to be punished. But he wasn’t leading this riot. He hasn’t got that much power.”

“It is just so much money,” Smallwood, 43, said of the bail sum of $500,000. “Who could afford to pay that?” Hawkins said the total exceeded the bonds placed on some accused murderers in Baltimore. Smallwood added: “If they let him go he could at least save some money and pay them back for the damage he did.”
Bullock had been protesting on Saturday with hundreds of others over the death of Freddie Gray, who died after his arrest by police in Baltimore. “He said the police were hunting and killing, not serving and protecting,” said Hawkins.

Gray, 25, suffered a broken neck that left his spine “80% severed” and his voice box crushed, according to his family. His injuries were sustained at some point during his arrest on the morning of 12 April and his transportation in a police wagon.

A front page from Sunday’s edition of the Baltimore Sun, picturing Bullock smashing the police patrol car outside the Baltimore Orioles baseball stadium with another young man the previous afternoon, now sits in his parents’ living room. Bullock’s parents said no action had been taken against the second man, whom they declined to name. Only one of the city’s four district courts was in operation on Wednesday, apparently due to security concerns, amid a logjam of dozens of people arrested during riots and protests in the past few days.

At the one district courthouse open in Baltimore’s south on Wednesday three courtrooms were open and processed bail applications all day. At one late-afternoon hearing in courtroom four around a dozen cases were heard in little over an hour. Inmates appeared before Judge Flynn Owens from the Baltimore City Detention Center via videolink. They routinely requested via their public defenders for bail figures to be lowered. Often this was denied and in some cases bail figures put forward by the state’s attorney were increased by Judge Owens.

Roselyn Michelle Roberts, a 43-year-old grandmother, faced two charges of fourth-degree theft and burglary. The court heard that Roberts suffered from manic depression and earned around $60 a week babysitting her grandchild. The state’s attorney argued for a $50,000 bail. Judge Owens revised the figure to $100,000 citing two pending cases against her and a record of eight prior convictions.

The court heard how Antonio Jackson, a father of one who works as a warehouse labourer, was allegedly caught with a pair of tennis shoes still with their price tag. He was not arrested at the scene of looting and his public defender argued he would lose his job if not released. The state’s attorney requested $50,000 bail. This was revised by Judge Owens to $100,000, who cited a single occasion when Jackson failed to appear at a scheduled court date.

All eight charges against Bullock are for misdemeanours. Rioting in Maryland carries a maximum sentence of life, according to state sentencing guidelines, but Bullock’s parents, who both have prior criminal convictions, said he could realistically face a sentence of between four and eight years.

The charges against Bullock are his first as an adult, according to his parents, who said he had been convicted of several minor offences as a juvenile over things like “theft and fighting”. They said Bullock earned roughly $15,600 a year working in sanitation for the city under a program for people in juvenile probation. He was staying in East Baltimore with a cousin.

Bullock has one one sister and three brothers, his parents said, and had attended night school in an attempt to obtain a high-school diploma after failing to graduate. He graduated from middle school in 2012.
Hawkins said he ran a business selling car detailing and earned between $900 and $3,000 a month depending on the briskness of trade. He and Smallwood said the rent for their cramped family house was subsidised but declined to give details.

His parents said Bullock was accused by police of inciting Saturday’s clashes between protesters and police, which followed peaceful marches and demonstrations. However they denied he had sparked the unrest, claiming other protesters had reacted violently minutes earlier after becoming involved in a dispute with passing Orioles fans.

“Teenagers follow one another,” said Hawkins. “That’s just what they do.”Smallwood criticised the arson and looting seen on Monday night. “They are going about this the wrong way,” she said, emphasising Gray’s family had said he would not approve. “Just destroying stuff for nothing? I think that’s ridiculous.”

Smallwood said Bullock required three types of medication to address attention-deficit/hyperactivity disorder (ADHD). She was worried after having not been able to confirm whether or not he was being given the tablets by jail authorities.

A court clerk was not available to verify the account given by Bullock’s parents of how he came to be charged. Hawking, asked if he regretted persuading Bullock to turn himself in, said: “No, because I know what would happen to him if he hadn’t.”
“I do,” said his mother.