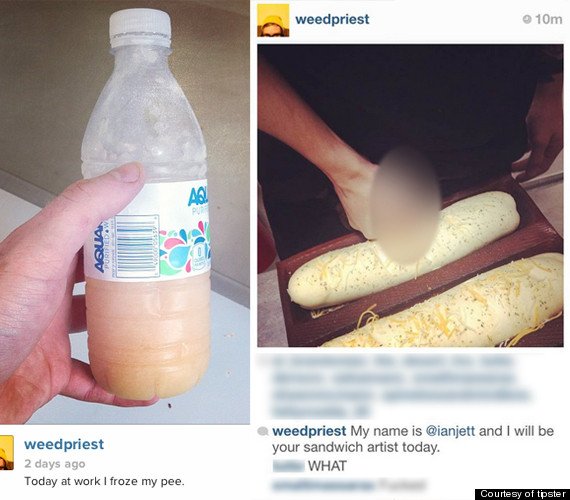 Next time you think about grabbing a $5 foot-long you might catch a flashback of this image.

Two “Sandwich Artists” employed at the Tuttle Mall store in Dublin, Ohio were found posting some disturbing photos of what they were doing on the clock: One is a pic uploaded to Instagram of a man’s penis on a Subway roll. The other is a pic of a frozen liquid in a bottle of water that reads “Froze my pee at work today.”

Boggs posted — and later deleted — the most incriminating photo, which depicts a man rubbing his genitalia on foot-long bread. It was posted on Instagram by username “weedpriest” with a caption that reads, “My name is @ianjett and I will be your sandwich artist today.”

In an exclusive interview with HuffPost Weird News, Ian Jett copped to defiling the footlong, but denied doing the dirty deed at work.

“I would never do that at work — it was at home,” he said. “This isn’t something I’d ever do at Subway. It was totally a joke.”