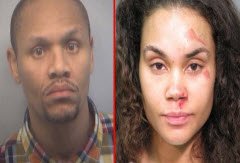 It all went down last weekend at a friend’s house in Georgia Tony Stokes accused Sara of being with another man and then allegedly choked and hit her.

Sara Stokes from “Making the Band 2” was allegedly choked and beaten by her husband Tony, who was thrown in jail after the dispute.According to law enforcement, Tony was arrested for simple battery and released the next day on $2,000 bail.

“Everybody speculates and blows things out of proportion. It’s a crazy kind of life. We’re dysfunctional. We need our own TV show. I love my wife.” Tony

This isn’t the couple’s first alleged domestic incident back in 2009, Sara was accused of stabbing Tony after an argument went nuclear.