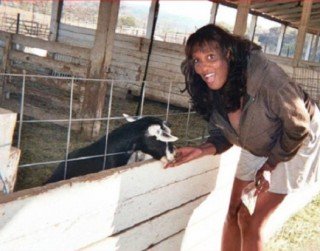 Wale has gotten a un expected buzz from Famed writer Kola Boof (who has been most recently in the press for her affair with Osama bin Laden) who was airing out Wale on Twitter last night.

“I don’t like @wale because he’s another Colorstruck Black Man who’s videos are pretty much White Supremacist images,” Kola tweeted to a follower. “The fact that @wale is Nigerian makes it all the worse, because he’s setting the wrong example globally for our race. A loser.”
“I can’t agree w/ that statement! I know that Wale went out his way to give all types of black wmn shine in his video(s),” @ericjunior wrote back.

“Yeah..**AFTER** I bi*ched at his colorstruck ass for a whole year!! Loser ass ******stock mofo. There wasn’t a single Black woman in “Pretty Girls”…so what in the fu*k was he saying about African women?? His own race? You motherfu*kers BREED your own people off the planet, get pissed when your 1/2 Irish daughter marries a JEW…hypocrites!”
Kola continued on a little more in the convo, and then started tweeting to all her followers.

“@WALE is a little Punk bi*ch Nigerian Skin Bleacher who wants to escape his own people & gets PAID 2 do so. I know enough about @WALE …and he’s a LOSER as Motherfu*ker in my book. Don’t give a sh*t who’s IN DENIAL. fu*k WALE. bi*ch @Wale you ain’t sh*t!!! But a fu*king disgrace to the African people!!” 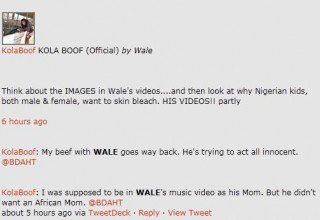 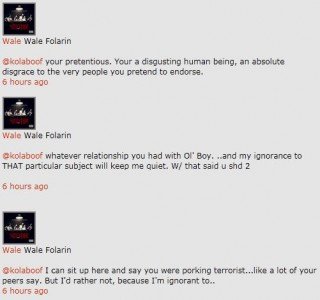 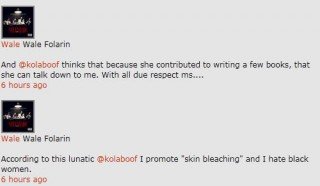 Wale responded to her and went on the radio today to address this.