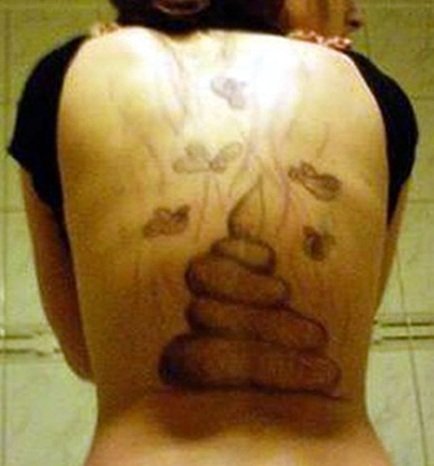 When Rosie Brovent of Dayton, Ohio, went to get a tattoo from her ex-boyfriend Ryan Fitzgerald, she wanted a scene from Narnia, but said it was up to Fitzgerald to design the look of the tattoo. What Brovent ended up with was a giant full back tattoo of a steaming pile of !!.

Apparently Ryan found out that she had cheated with a long-time friend of his and this was his way of getting even. Originally Rossie tried to have Ryan charged with assault but it turns out this crafty tattoo artist got her to sign a consent form prior to the tattoo and it said that the design was ‘at the artists discretion’, she claims;

“he tricked her by drinking a bottle of cheap wine with me and doing tequila shots before I signed it and got the tattoo”. “Actually I was passed out for most of the time, and woke up to this horrible image on my back.”