Meek Mill had a lot of people staying up last night longer than expected laughing at his Twitter debacle. Meek Mill took to twitter to diss Drake, saying the rapper can’t even write his own rap lines.

Chris Brown And Rick Ross where the first celebrities to weigh in on the beef this morning.

However, hours later the story that has since spread like wild fire shows no signs of cooling off as Drake’s Loyalist continue to ram Into Meek Mill.

A Councillor from Drake’s hometown of Toronto was top among the reactions as he Jokingly revealed that meek Mill has been Banned from visiting The City of Toronto.

My boss ain’t even the real Ross #MeekBeLike

#MeekBeLike North West not even from the north

#MeekBeLike Bob ain’t even a builder

“yea girl, he ain’t write all them hits by himself.” pic.twitter.com/O9rBkPuyrc 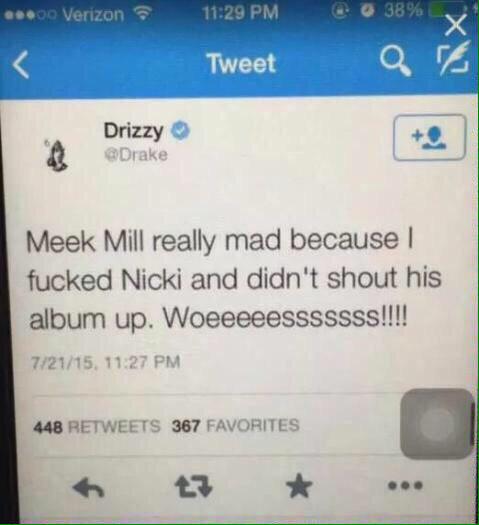 When Drake said – ‘a bunch of handshakes from the fakes” pic.twitter.com/30b9TR3TmM