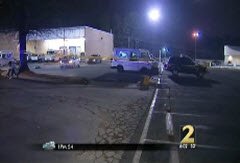 One person was shot in the parking lot of a Sandy Springs nightclub early Monday, authorities said.

A witness told Channel 2’s Kerry Kavanaugh he and his friends heard a fight, then heard gunfire exchanged between two groups of people.

Police said one man was shot in the upper chest and taken to the hospital with non-life-threatening injuries.

Kavanaugh said police questioned two men at the scene, but did not appear to take the men into custody.

Kavanaugh said police had not yet released a description of the shooter. Source