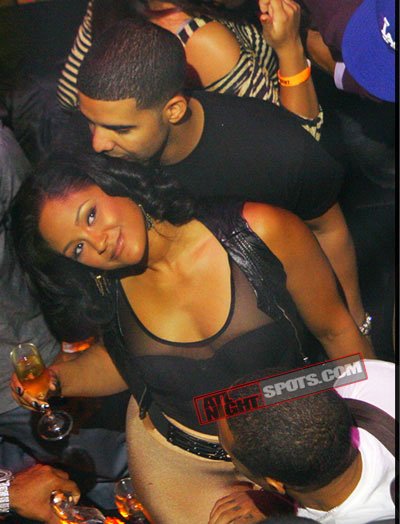 Maliah talks about her career and how her and Drake hooked up.

VIBE: How did you get into modeling?

Maliah: I just fell into it —modeling wasn’t really something that I always wanted to do. I knew that I wanted to work in the entertainment industry, but more on the acting side. Really, I kind of gave up on acting at an early age. Certain situations just made me feel like I could never really do it.

What turned you off from acting?

I had a lot of family problems growing up and I ended up leaving home really early to live with my sister. She was the one who taught me everything I know about life and being a woman. It was just really stressful having a bad relationship with my mother, everything really started falling apart after I graduated high school.

Did you think about going to college or other career plans?

I had a scholarship to Calstate Northridge for softball, but I just couldn’t go through with the whole college thing. I had no focus — life was just too much for me at the time.

How were you supporting yourself?

I was in this program called Americorps which was like an assisted living program, but it wasn’t much. My sister and I stayed in a one bedroom apartment with her two kids. We were basically just sharing everything we had and holding each other down the best we could. But when I turned eighteen — I went to the strip club and that’s when I started making my own money. I got my first gig at a club in Beverly Hills.

Were you making a lot at the time?

Actually, my first club was a white club and I’m vuluptous (laughs), so I really didn’t fit in there. I was probably only making eighty dollars a night. But at the time it was a lot to me. Before that I was just living off a stipend from Americorps which was just like two-hundred dollars every two weeks. The whole reason I dealt with it though was that at the end of the year though they were going to give me a scholarship to the Santa Monica College of Cosmetology.

Did you continue dance while you were going to school?

Yea, I started working at a black club, and I was making five-hundred dollars a night, easy. And when you’re nineteen —that’s great money, but it was a pretty rough environment, girls had pimps, there was constant fighting and drugs were always around. I think a big part of what saved me was that my brothers were really known and had a reputation. So nobody really messed with me at all. Everybody just treated me like their little sister.

So when did you stop dancing?

Actually, I still do dance. I quit for about two years though. I saved a lot of money and I bought a house in Vegas. Really, I tried to settle down and get married. I ended up getting engaged but my fiance got addicted to crack and heroin and everything went in a downward spiral. I lost everything… my house, all my money. That’s when I really buried myself in church. I was going door to door witnessing with the church —I wasn’t dancing or modeling for a while.=

Wow, so you went from the pole to the pulpit…

All I did was go to church. I mean, I literally had to pull a gun on my ex-fiance. That whole experience led me to God.

Drake had actually come to the club where I work at in Houston called Dreams. I think that’s where he first saw me. I didn’t even get to speak to him that night and like a week later everybody started telling me Drake shouted me out in a song. I thought that it was so cool because I hadn’t even talked to him before. I mean, obviously he saw something he liked (laughs).

So prior to Drake name dropping you on “Miss Me”, you guys never even shared a conversation?

Yup, I was so flattered, too —especially with me being used to the strip club environment, where guys are always just… thirsty and on you. This guy didn’t even say anything but gave me props on a song.

Well, so how did you end up starring in “Find Your Love”?

A friend of his Jazz Prince, J.Prince’s son, called me and told me that his artist wanted me to come to Jamaica to shoot this video. At the time I didn’t know it was Drake, so I was like “Oh by the way, can you tell Drake thanks for the shout out”. And right after that he told me he called me back. So later on that night Drake called me directly and told me that he was the one shooting the video and how he wanted me for the lead part. I got to admit I was really geeked and could barely talk.

What were your first thoughts of him after that first phone call?

My first thoughts were that he was just so humble and respectful. It was almost weird, I didn’t expect him to be like that… even now that I know him a little better he’s just really a down to earth guy. He can have his moments but he’s really a good guy and I felt that way since the first time I talked to him.

Yea, your onscreen chemistry seems so natural, almost like you guys really are a couple…

It was so funny because when we were shooting the beach scene. The director, Anthony Mandler, was like “Come on, Come on! You got to make me feel this!”. And we had never kissed or anything before, so I just went for it and kissed him! And we started kissing for real and everybody just started cheering.

So are you dating Drake?

Um… Drake and I are good friends, and we like hanging out… having fun together. That’s all that anyone needs to know at this point.

But it’s safe to say that you guys stay in constant contact with each other, right?

He seems to have his mom around a lot. Have you met her yet?

I mean she’s a huge part of his life, you must have bumped into momma Drake somewhere…

Yea, she’s amazing… a really beautiful person. His mother really gave me a whole other opinion of him, even though my opinion was very high. He’s just amazing as far the respect level and his mother helped me to see that it wasn’t an act. That’s all I’ll say.

Do you think he’ll sell a million in one week?

I think he can do it. Thank Me Later is one of those CD’s were you can listen to without skipping a song. Drake has a different flavor to him.

Are you guys planning on doing anything special in celebration?

Do you think Drake making that song about Maliah before talking to her was game or lame?