A former Wake Forest student will appear on NBCs Today Show on Thursday morning to accuse NBA star Jeff Teague and his former Demon Deacon Basketball teammate of raping her the night before the team’s first-round NCAA tournament game in 2009.

The victim filed a complaint at the time with the Miami police department alleging that former Wake Forest guard Gary Clark se*ually assaulted her in a hotel bathroom while teammate Jeff Teague stood watch outside. Miami police investigated the woman’s claims but did not file charges because of insufficient evidence.

“The University takes these issues seriously, has a well-established Code of Conduct and has procedures for hearing alleged violations of that Code of Conduct,”

“In addition, Wake Forest offers significant resources to support our students in times of need.”

The day after the alleged incident the Demon Deacons were shocked in a first round upset to 13th seed Cleveland State. That loss cut short a great season that year for Wake Forest. Jeff Teague went on to be drafted in the first round later that summer. He is currently in his second year with the Atlanta Hawks where his team just recently became eliminated in the NBA playoffs. Clark finished his Demon Deacon Basketball career starting twenty-six games this past season and graduated this spring.

Damn she waited till she seen him ballin in the playoff.. 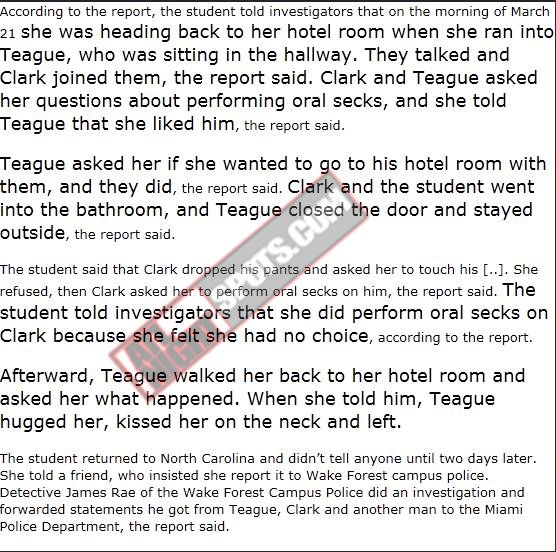