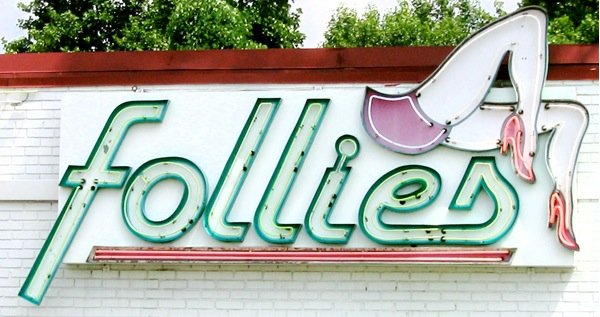 I arrived at Follies around 12pm, parked next door to avoid a paying the valet charge up front. Every time I parked next door for free I never had a issue with my car, the employee’s up front will advise you not to park there.

I walked up to the front it was a long line and a short VIP line, so I waited in the regular $10 line to see how long the wait was going to be. It was about 10 people ahead of me. The VIP line was $40 and you basically got right in.

After 10 minutes the line basically never moved, multiple people walked up and left cause it was cold as f^ck outside (nose running weather). After 20 minutes a couple of people walked in the from the regular line, about 15 people got in from VIP line. 30 minutes later I was up front, they announced the women couldn’t come inside alone.. so I had a new friend with me. When I asked the arrogant white manager who was responsible for who went in “Why does it take 30 minutes of waiting in line to get inside?” his response was “You know how it goes were packed inside”. Everyone in front of me was just as pissed as I was, cause we watched 20+ people walk in cause they were willing to pay $40.

Prior to Follies being the hot spot on Sunday they never had any lines to wait in you always got right in line any other strip club. If Follies fell off tomorrow it would go back to how it used to be, pay $10 and walk in.

When I finally got inside I met up with my peoples at the bar, it was a lot of people in there as usual being that Follies is a small club inside. The bar tenders atti*ude wasn’t the best, she acted like people were bothering her asking for drinks. They had strong drinks that were worth every dollar you were charged. 30 minutes after I ordered something 2 women sitting at the bar started screaming on the same bar tender who served me, another bar tender came over to calm the situation. All of the staff treats it’s customers like sh1t from my experiences.

I noticed they either got a new DJ or stopped mixing rap and rock music like they used to. My past Follies review complaints have always been the DJ sucked.

On the good side of things the women looked good, finding a place to get a dance wasn’t easy though. The dances are $10 and the DJ plays the whole song unlike most ATL clubs. If you want to relax and enjoy the visuals I suggest you get there early, early before the late night crowd arrives. When guys find a good seat they usually won’t move until the club closes.