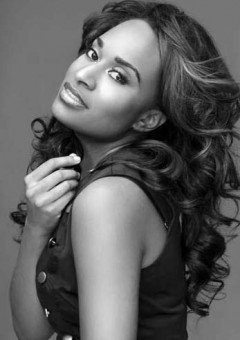 When your father is former undisputed heavyweight boxing champ Evander Holyfield, you’re gonna be one tough cookie. At 27, Evette Holyfield’s convictions are stronger than ever, and when it comes to having se* before marriage, she refuses to budge. She credits her father for giving her the bright idea at the early age of six, but her faith for helping her see it through from then on.

Now Holyfield speaks to young women about her decision to put herself (and her body!) first and to focus on her dreams rather than making a man happy. We sat down with her to ask all of the things we thought our readers might: Is it hard to do? What do your boyfriends have to say? Do other women give you a hard time about it? Holyfield was refreshingly honest and a total inspiration. Read her answers now.

ESSENCE.COM: When did you decide to be abstinent until marriage?
EVETTE HOLYFIELD: We grew up in a Christian home. When I was around six years old, my dad said to me, “You don’t need to have se* outside of marriage.” He went through the whole spiel with me. So as I grew up, I thought, okay dad, if you don’t want me to do it, I’m not gonna do it. Then I started to really understand church – the words in the Bible and what the pastor is really saying. At that point, I wasn’t just doing it because my dad said don’t, but rather, I now believe that by waiting, God will bless me and bring me a great husband. I want to meet somebody amazing, and I know that if I do this, I’m doing this for him and I. That’s what I want.

ESSENCE.COM: Has it been a difficult decision for you?
HOLYFIELD: Honestly, it’s easy for me. I was in a three-year relationship, and I never had those desires for him in that way. He never pressured me. In my mind, I already have it set that I’m not gonna do it, so if someone were to pressure me, it wouldn’t even phase me. I just don’t have those desires.

ESSENCE.COM: When you’re dating, do you put it out there right away?
HOLYFIELD: If I’m talking to someone I actually like, I say, “Look. This is not gonna happen, and there’s no chance.” An ex once told me we couldn’t be in a relationship if I wasn’t going to have se* because he knew he would end up cheating on me, and he cared about me too much. He chose to break it off rather than take it further.

ESSENCE.COM: Has your decision ever cost you true love?
HOLYFIELD: I feel like if a guy truly loves me, and he’s ready to commit, then he will do everything in his power to make me happy and meet my criteria.

ESSENCE.COM: What kind of man are you looking for?
HOLYFIELD: My dad is a leader. That’s what I grew up with, so that’s what I want. I really need the person that I’m going to be with to be a leader. My father’s proud of me for waiting, and he knows I’m not going to just be with someone for some material reasons.

ESSENCE.COM: How do your girlfriends react to your stance? Women can be emotional bullies too.
HOLYFIELD: My sister is a virgin, and I have a couple of friends who are virgins too. Some women have said to me, “Why would anyone want to date you if you haven’t had se*?” I ask them, “Why would anyone want to date someone who has slept with the whole world?” Having se* with a man is not what’s going to set you apart. What’s going to set you apart is what’s in your head. Show a guy something different — something that will stimulate his mind, not something they see or get all the time.

ESSENCE.COM: Do you encourage others to make the decision you have?
HOLYFIELD: I have talked to young groups of kids at different schools about the keys to success, and one of the secrets I tell the young girls is to preserve themselves and their bodies and not to give them away to someone who doesn’t deserve it. I tell them to instead focus on themselves and their dreams because everything else will come after that. I feel like young girls these days are too focused on getting a man and not on empowering themselves. Guys are going to treat you how you allow them to, and if you don’t respect yourself and feel like you’re worth something, then you will feel like you should do whatever a man wants you to.

ESSENCE.COM: Should every woman wait until marriage?
HOLYFIELD: I would prefer if women waited to have se*, but I know it’s unrealistic to think that all women are going to think like me. I think women should make a list of what they really want in a man. Then, wait, really stick to your guns, and have faith that God is going to give you that person. If women did that, it would save them a lot of heartache. Never settle. Source