Home News Drake Is A Hidden Character On ‘NBA 2K11’ 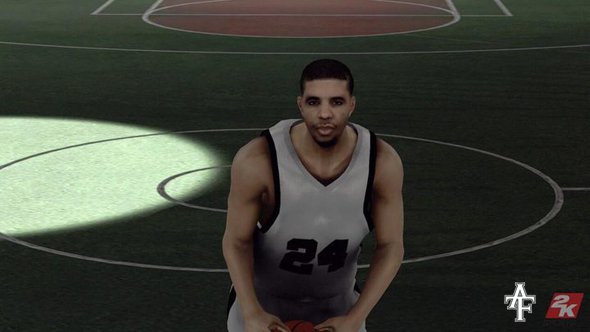 Drake is putting up big numbers for Cash Money but I never seen him ball on the court other then this NBA 2K11 picture. Drakes fans can pick drake to run on there favorite squad with the unlock code according to AllThingsFresh. In case you haven’t got 2k11 you can download from the forum here.

In other Drake news, his bodyguard is facing battery investigation for attacking fans.

Canadian child star-turned-hip-hopster Drake has lost a pair of fans in Jacksonville, Florida after the rapper and his bodyguard allegedly attacked the autograph seekers at nightclub in the sunny city last Thursday night.

Jeremis Soriano says he and his pal just wanted to say “Hello” to the Grammy-nominated Young Money soldier, who was in The Sunshine State for a concert, when they were swiftly greeted with the cold shoulder and a few punches from Drizzy and the star’s beefy bodyguard.

Newest message board posts:
Beyonce Dancing with people at a Block Party
More NBA Media Day
George Lopez divorces the woman that gave him a kidney
Propz to D. Wade for just sonning Barkley on Sportscenter
Best Of Honey
Diamond The Show Stopper