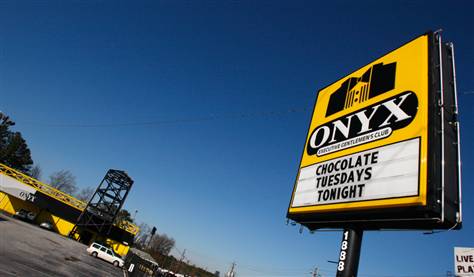 Could you imagine some of your favorite strip clubs in Atlanta with out any alcohol?

Brookhaven City Council adopted a new ordinance that will prohibit the sale of alcohol in strip clubs and other adult businesses.

The ordinance, approved Jan. 15, is similar to the one currently in place in DeKalb County, and will prohibit any contact between dancers and customers, among other regulations.

The Buford Highway strip club Pink Pony is the only business in the city of Brookhaven that will be affected by the new ordinance.

Brookhaven City Council members took up the matter after attorneys advised them that DeKalb’s existing ordinance was poorly written and unconsti*utional.

“Our ordinance does the same thing DeKalb’s does, it’s just written in a more thoughtful way,” said Mayor J. Max Davis. “We’re not trying to run anybody out of business. We hope everybody stays in business, including those that may be affected by this ordinance.”

Aubrey Villines, an attorney for the Pink Pony, has argued that the city is bound to honor the settlement agreement that allows the club to sell alcohol. Pink Pony stakeholders say if they can’t sell alcohol, they will not be able to compete with clubs and surrounding areas, and will be forced to close down according to reprtersnewspapers.

“We are convinced the ordinance is unconsti*utional, unenforceable and indefensible in a court of law and public opinion,”

Villines said. Though Pink Pony attorneys have threatened legal action, Villines said the club is not yet ready to file suit against the city.

“We’re not going to file a lawsuit tomorrow,” Villines said. “We think City Council will continue to work with us and at some point do the right thing.”

Though at the council’s public hearing Jan. 14, attorneys made it clear they were prepared to take the city to court over the ordinance.

Attorney Alan Begner said he had been retained by the Pink Pony should legal action become necessary. He told council he has successfully represented clubs in similar lawsuits against the attorney who drafted Brookhaven’s law, Scott Bergthold.

“Scott Bergthold and I have had four litigations in Georgia. All of those cases, which happened in Floyd County, Coweta , Sandy Springs and Bartow County, my clients have all stayed open and remained open every day of the time. Three of those cases are over and we have all of the uses we wanted. The Sandy Springs case remained ongoing,”

Dennis Williams, the Chief Financial Officer for the Pink Pony, pleaded with council members to consider the many people who would suffer if the club were put out of business.

He said there are many long-time employees who have been able to buy homes and raise their kids in the community because of the income they receive from the Pink Pony.

“By taking away our non-conforming status and not keeping us in the format we’ve agreed to all these years with DeKalb County, … it’s going to take money out of their pockets. Their income is going to be dramatically affected,” Williams said.

“You’ll probably put 280 to 300 people out of work. Competi*ively, with the city of Atlanta and surrounding clubs, the format that you’ve introduced is not competi*ive. It’s somewhat unfair to the people that have worked there all these years.”

Wan, a first-tem councilman who took office in 2010, has proposed legislation to force the grandfathered-in non-conforming se* and po** shops out by 2015. Also scrubbed out of business along the thoroughfare would be car washes and auto repair businesses, which fall into non-conforming businesses in the zoning approved by the city as well.

The possible deadline may now be extended until 2017 as Wan and Neighborhood Planning Unit F seek to compromise with businesses. NPU-F includes Cheshire Bridge Road and is made up of Lindridge Martin Manor, Morningside Lenox Park, Piedmont Heights and Virginia Highland