Could these two incidents be connected? You be the judge..

Allen Iverson’s Lamborghini Murcielago remains on an Atlanta-area impound lot more than three months after it was impounded for a lack of registration.

In early April, Atlanta Police officers pulled Iverson over in Buckhead because his Lamborghini did not have a license plate.

When officers had the high-performance sports car towed, the 11-time NBA All Star famously told officer,

A hundred days later, that exotic ride with the other-worldly price tag sits, rusting in the summer sun, behind a strip club on Cheshire Bridge Road at Futo’s Towing.

11Alive’s Jeff Hullinger has been told by a source, it costs about $14,000 a year to buy a Georgia tag for the Lamborghini. In four years, this Italian high performance car has never been tagged.

Atlanta Police said they are trying to get a hold of the Alpharetta resident.

According to Carlos A. Campos of the Atlanta Police Department:

“We have attempted to reach Mr. Iverson by certified mail that his car will be declared abandoned after 90 days of impound at a city contracted lot (Futo’s), That we have the right to sell the vehicle at public auction.” The letter has been returned to sender. Other efforts (by Atlanta Police) will be made to reach out to Mr. Iverson.”

Last November, the Philadelphia Inquirer reported that Iverson is broke. The newspaper alleged Iverson has burned through more than $154 million in 15 years, and that doesn’t include a lucrative show deal with Reebok.

Hullinger has been told an auction is at the discretion of the towing yard owner. And he apparently is in no hurry. 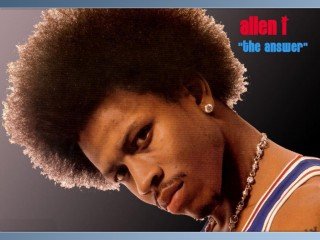 Allen Iverson wants to keep his passport at home.

Ten years after he ruled the NBA as the cornrow-wearing, ink-stained MVP who led the Philadelphia 76ers to the Finals, Iverson has his eyes on a comeback. He is determined to end a career possibly destined for the Hall of Fame in the NBA, not in some faraway country where brief YouTube clips are the only way to stay updated on the four-time scoring champion.

Iverson, who turned 36 this week, played only 10 games in an injury-filled stint in Turkey after a lack of NBA interest forced him to seek employment elsewhere. In his most recent NBA season in 2009-10, Iverson left the Sixers in February.

That’s not a lot of basketball for an aging veteran.

So what gives Iverson confidence he can still play anywhere near his former elite level next season?

Every fan knows how the 25-year-old Iverson could dazzle on the court. Like in the 2001 NBA Finals, when he buried a jumper over Tyronn Lue, then highstepped over the fallen Los Angeles Lakers defender in Game 1. The iconic moment ranked slightly behind his rookie year crossover vs. Michael Jordan as the most memorable of his 14-year career.

Iverson’s added few plays to that list the past few years. He played for four teams in his last two NBA seasons, then left the Turkish club Besiktas with a leg injury.

A painful calcium mass developed on his right calf and he returned home opting for rest instead of surgery. Iverson’s manager, Gary Moore, said Iverson has yet to receive the green light from Dr. James Andrews to resume contact drills. Iverson was not expected to get cleared until mid-July.

“Just give me a training camp,” he said. “Maybe I’ve rubbed people the wrong way as far as saying the things I’ve said in my life and in my career. But if any team needs me to help try and win a championship in any capacity, I’m waiting.”

He might have a long wait. Throw in a possible work stoppage with NBA owners and players far apart on a new labor deal, and Iverson might again be forced to look outside the NBA for a team. He signed a $4 million, two-year contract with Besiktas. But Iverson, who also has played for Denver, Detroit and Memphis, made it clear in a phone interview late Wednesday night, his first priority is the NBA.

Iverson has been dogged by rumors of personal problems — his wife filed for divorce and a daughter battled serious health problems — but he said his life these days is great.

All that’s missing is basketball.

“The only thing that I give a damn about is that the people that care about me know that I’m all right,” he said. “All I want is my real fans to know I’m fine, my wife is fine, my kids are fine. I’m fine and I’m looking forward to getting back on a team and being productive like I have been my whole career.”

Iverson insisted he enjoyed his stay in Turkey.

“It was one of the greatest experiences I’ve ever had in my life,” he said. “They were great to me. They embraced me like I would never think. Everything was great as far as that experiment.”