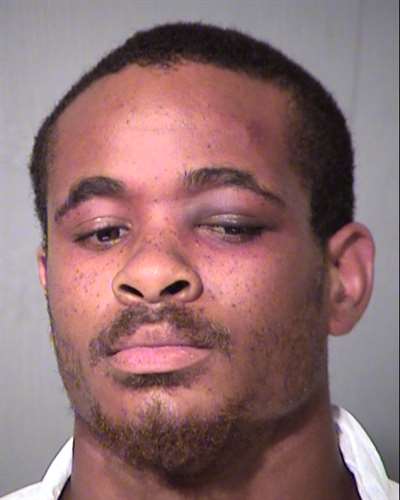 A Phoenix man was arrested after police say he was found in bed naked with an 11-year-old girl early Monday morning.

According to court documents, Anthony Mitchell, 27, met the victim online and talked on a website. She reportedly told him that she was 26 years old.

The victim invited Mitchell to her apartment and police said they had sex.

Officers said the victim’s father arrived home and found Mitchell naked in bed with his daughter. She was partially clothed. He restrained Mitchell until officers arrived.

Police say that Mitchell initially told them that he knew the girl was not 26, but thought that she was 16. He later changed his statement, saying that he believed that the girl was 18.

Mitchell faces two counts of sexual conduct with a minor and one count of sexual abuse.

April 2016 mugshot from a different arrest

Father who caught 27-year-old with his preteen daughter speaks to ABC15
http://www.abc15.com/news/region-ph…-27-year-old-with-his-preteen-daughter-speaks

PHOENIX – A Phoenix father who found an adult man in bed with his 11-year-old daughter said he took extraordinary measures to try to prevent such an incident.

He used technology to supervise what his daughter did online, and did not allow her to have a phone of her own.

But on the same day that Dad got her a phone so she could talk with her mother, the girl used the phone to chat online with a man and invite him over to the family apartment, to devastating effect, the father said. The suspect, 27-year-old Anthony Mitchell, had sex with the girl, according to court documents.

The father, whom ABC15 is not identifying to protect his daughter’s identity, discovered the man with his daughter when he took a work break June 13 to stop at his apartment near 36th Street and Thomas Road, the father said.

After Dad’s surprise entry, the suspect tried to escape.

The girl’s aunt, who had been asleep in the next room, called police and officers arrived. The aunt had taken medication and the 11-year-old turned up the TV during the encounter with Mitchell, Dad said.

The officers arrested Mitchell, who was later charged with sexual conduct with a minor. A request to interview Mitchell inside the jail was unsuccessful.

The father said he has disciplined his daughter in connection with the incident and she is receiving counseling.

His daughter only looks like a little girl “from the neck up,” Dad said. Whistles and stares from adult men have become a frustrating part of taking her out in public.

“I don’t understand how… you can look [like that] at a little girl.”

Dad said he has nearly gotten in a fight at Wal-Mart after one such incident.

He has now banned his daughter from the internet. He said that he tried to watch her as often as he could and left her at home with her aunt, so he could go to work.

He believes that society oversexualizes young girls and his daughter’s interest in her sexuality is connected to a one-time Disney star’s transformation from a wholesome role model into a controversial sex symbol.

His daughter idolized the Disney Channel character “Hannah Montana,” played by actress and singer Miley Cyrus. As Cyrus grew older and put her sexuality on display to the world, the Dad’s 11-year-old daughter started to be interested in sexuality as well, the father said.

Dad’s only advice to other parents is to try to watch their children “24/7.”