Home Celebs 3 Sports Stars Who Have Lit Up Atlanta 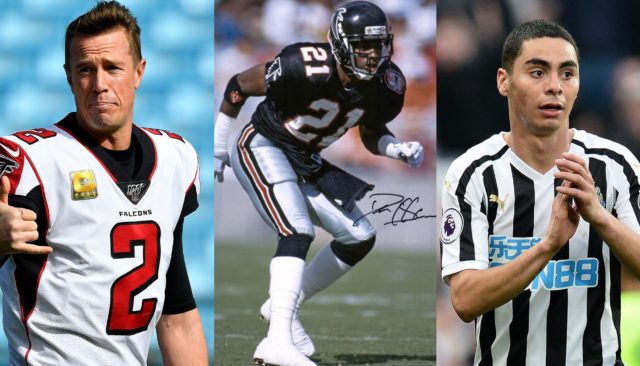 Atlanta has a proud sporting history and has played host to some outstanding athletes who have reached the pinnacles of their respective games.

They have earned individual awards and have brought titles back to the city. We’ll now look at three sportsmen who have thrived in Atlanta during the last 30 years.

No player has perhaps been more enigmatic in the city than Deion Sanders. He was a larger-than-life figure during his career in the NFL and the MLB and remains so to this day. Sanders is one of the rare men who was able to play professionally in both the highest levels of football and baseball, although he was truly great in the NFL. The Atlanta Falcons selected Sanders with the fifth pick in the 1989 NFL Draft, and for five seasons he was outstanding as a cornerback and as a kick returner for the franchise.

There have been few players in the league who have been able to match the coverage ability and running threat with the ball compared to Sanders, who earned his place in the Pro Football Hall of Fame. He left the Falcons during free agency to join the San Francisco 49ers, which also ended his career with the Atlanta Braves in the MLB. Sanders enjoyed the best three years of his baseball tenure with the Braves, notably the 1992 season when he averaged .308 at bat and notched eight home runs.

Sanders was truly a special athlete and the people of Atlanta were fortunate to witness his greatness for five years in the 1990s. He remains a poignant figure to this day due to his exploits on the field, while he is also one of the most outspoken and popular pundits on television. Not many weekends during the NFL season go by without Sanders, capturing the attention of fans across the States – his highlights are always included in his proclamations – notably in his time in Atlanta.

Almiron played only two years for Atlanta United, but his importance to the city and the franchise cannot be understated. The midfielder was outstanding for the team during their run to the MLS Cup final in the 2018 season. During their campaign he was extremely influential in the final third, notching 12 goals in 32 appearances along with 11 assists. He was instrumental in ending Atlanta’s 23-year drought without a major title in the city when United beat Portland Timbers 2-0 in the MLS Cup.

Almiron has since moved on to the Premier League with Newcastle United for a fee in the region of £25 million. After a tough first year for the Magpies, he has found his feet and is helping Steve Bruce’s side move away from the relegation zone, with the club being backed in the Premier League betting odds at -1600 with bet365, to remain in the division for another season. The supporters of the club have taken the Peruvian to their hearts, backing him despite his early struggles at St James’ Park. Almiron still remains an important figure in Atlanta due to his personality and performances on the field. He was one of the few players to have helped bring the city glory, with another title looking unlikely at least in the near future.

Ryan almost brought the Vince Lombardi Trophy to Atlanta for the first time with his side’s run to the Super Bowl in the 2016 season. The quarterback was sensational, throwing for 4,944 yards and 38 touchdowns to only seven interceptions. His performances secured him the MVP award for the first time in his career. Ryan put on a clinic in the post-season, easing Dan Quinn’s side past the Seattle Seahawks and the Green Bay Packers.

In the opening three quarters, Ryan dismantled the New England Patriots, ushering the team into a 28-3 lead. However, in one of the darkest 18-minute spells in Atlanta sports history, the Falcons allowed Tom Brady to drive the Patriots back to snatch the title away. It was still a fantastic season for Ryan and he has singlehandedly attempted to keep the Falcons in contention for the Super Bowl since, although injuries and other issues have prevented a return to the ultimate showdown.

There have been few players in the history of sport in the city to have captured the imagination of the fanbase during the run towards the Super Bowl four years ago. It was not just the success of the team, but also the exciting manner in which they performed. Ryan made the Falcons appointment viewing in the 2016 campaign and they have been striving to return to that level ever since.

Another man could well etch his place in the history of sports in Atlanta. Trae Young has enjoyed an outstanding start to his career for the Hawks, earning an All-Star berth in only his second season. The 21-year-old is well on the way to becoming one of the stars of the NBA and the city has already taken him to their hearts. A future championship would see him become a legend.