Home Music You Need a Drum Rug and Here’s Why 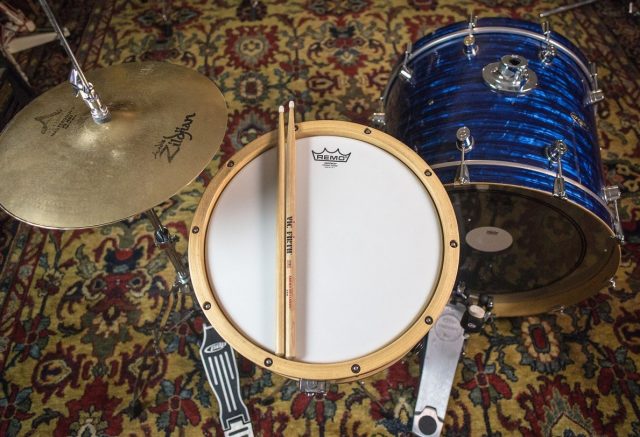 Even if you’ve been to just a couple of gigs in your life, you know that many drummers have those sometimes weird rugs under their sets. As a beginner drummer, you may be asking yourself if there’s a reason to have one for your set. Our friends from simplydrum.com explained the necessity of drum rugs in detail, so this comprehensive guide would give you even more facts to consider that you expected. If you agree with the arguments for using drum rugs, read here to choose the best one for your drumming corner or studio.

A Look Into Physics

Playing any drum kit involves the use of physical effort. When you strike a drum, you don’t only produce a sound, but also send a shockwave down the entire kit. Of course, the strength of the wave depends on the power of your strike and can be too weak to result in anything, but most songs require strikes of different strengths. For example, metal songs always require heavy sounds, usually at high speeds, that can easily make the drumset shake too much.

So, what happens when you hit a drum? The shockwave goes through the stand and translates into the floor surface. While the snares and the cymbals send the wave vertically or at a slight angle, the floor kick receives a horizontal strike from the mallet. Even if you’re not a rocket scientist, you can imagine that the drum should move a bit forward after every horizontal hit. If you hit it once, the difference won’t be noticeable, but any song includes dozens and hundreds of hits that produce enough power to move the entire kit away from you. Oh, and don’t forget that the most wandering part of the entire kit is the drum throne that you sit at. You will need to move it all the time to achieve the most convenient position, so scratches on the floor are inevitable.

Well, throwing a rug under the kit appeared to be the simplest way to stop the kit from moving forward. Everyone has a rug at their place, so it eventually became an industry standard. Actually, the only purpose of drummers many years ago was to stop that wander. They definitely didn’t expect to gain any other benefits from using it, but they gained!

The second important benefit of a rug is floor protection. Although drum stands have gum pads to prevent floor scratching, they don’t help a lot. You probably already noticed that if you had tried to play on a laminate without a rug. You don’t want your wife or the house owner to be upset by those scratches, do you?

Soon after the “discovery” of drum rugs, musicians realized that the soft material has a particular effect on the acoustics. The sound always spreads around the room and bounces off hard surfaces if they are not covered with any sound absorptive materials. As a result, the echo fills the room, making the original sound not as clear as you may wish. No matter what room you play in, a rug will add extra echo suppression and help you focus on the sound.

If you dig even deeper, you will find that the vibrations produced by each drum interfere with the waves produced by neighbor drums. While that’s nearly impossible to notice when you are exercising with the band, all the excess noises will come out when you record the drum part and try to edit it. There’s a good resource on how to record drums well on kickstartyourdrumming.com. On some kits, the snare drum may even start to rattle loudly if there’s n dampening. Finally, the ability to cut noises and higher frequencies makes a drum rug a must-have if you want to reduce the loudness of your kit in an apartment.

You may think that any rug will work well for your drum kit. Actually, it can be true, but not all carpets have the qualities to provide the needed effect long enough. Although your rug stops the unwanted motion and absorbs sounds and vibrations, it doesn’t get rid of the force produced by the kit. It simply diffuses it over its own surface. It’s quite unobvious, but the force can damage the fibers. If the carpet’s material isn’t strong enough, it will wear off quite quickly and surprise you with sudden inconveniences during one of the gigs. Oh, it’s so painful to latch on a small hole in the rug with a drum throne! If you don’t want that to make you fall off the throne in the middle of the gig, you have to choose attentively.

The next important aspect is the texture of the rug. Many of them can be quite slippery for your drum kit and not solve the problem at all. The material has to make your kit stick to the floor. For this and some other reasons (read the next paragraph), most drummers invest in solutions made by musical instrument manufacturers. They usually offer not only the needed strength of the material but a variety of professional extras that cannot be found even in the best home carpets.

Purchasing a rug from a musical brand, you can opt for some useful extras. The most important of them is the non-slip base. Such rugs are rubberized on the bottom so that they don’t slide on any surface.

The next non-slip measure involves weighted corners. Manufacturers put special heavy plates into the corners to hold the mat in place even better. Speed metal drummers usually opt for this feature along with a bass drum stopper that works as an additional obstacle for the bass drum to move.

Professional rugs can be also made compact so that you can easily transport them in your vehicle. If you are looking for a non-transportable studio solution, or the vehicle space doesn’t matter, you can even get a mat with integrated cable management ports. This option makes microphone cable routing in the studio and on stage much easier.

Let’s Rug It Up

Having all these facts in your head, you should decide whether all the benefits are worth your cash or not. The main rule to remember is to choose the item based on its features rather than on aesthetics. Fortunately, the market has a wide range of options to match the liking of different drummers. You need a rug that will really work and boost your drumming experience, so pay close attention to the reviews of other players and musical experts like the writers from simplydrum.com.