Home Sports What Would’ve Happened if Bogdanovic Hadn’t Come? Hawks in the Playoffs After... 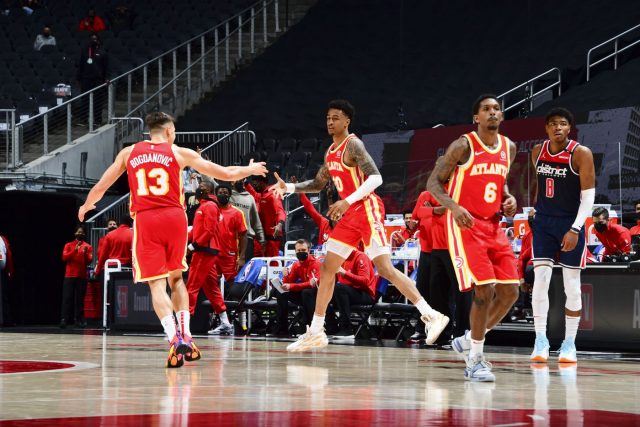 The Atlanta Hawks have officially secured a place in the 2023–21 NBA playoffs thanks to the victory over the Washington Wizards on May 12, which came after a big turnaround in the finish of the match. The Hawks managed to get back from a 13-point deficit, their shot was fantastic in the last period and, in the end, they reached the crucial, 39th victory this season – 120-116.

The key moment of the match happened 24 seconds before the end when John Collins scored a three-pointer and brought the first advantage to the hosts in the second half (117-116). Those points made the Wizards nervous for the remainder of the match while, on the other hand, they brought calm to the home team so Atlanta sealed the success – for which sports bookmakers with innovative payment methods listed here have set low odds, giving the Hawks the role of favorites – from the free-throw line.

In the ranks of the winners, Trae Young was almost unstoppable, being just two rebounds and one assist short of the triple-double. He scored 33 points, and a part of them was more than valuable in the last period when Washington gained the advantage. The mighty Serbian shooting guard Bogdan Bogdanović, who was the second scorer in Atlanta with 20 points, also played an excellent match. He spent the most time on the court in the hosts, a little over 40 minutes, and continued to provide great games. This was his sixth consecutive game with a double-digit number in points, and the third in a row in total with at least 20 points. He reached an average of more than 20 points, 4 rebounds, and 4 assists in the last eight games.

The Key Person Bogdanović and the Accidental Arrival in Atlanta

We all knew what Young was capable of given this is his third season with Atlanta but it seems that the player who made the difference for the Hawks to make it to the playoffs after so many years was exactly Bogdanović. He simply exploded in the last couple of months.

There is no longer a dilemma: Atlanta made the biggest deal in the offseason with the Serb. He was one step away from moving to Milwaukee but he eventually left the Sacramento Kings to move to Atlanta, signing a four-year contract worth $ 72,000,000. He gradually grew in the Kings, then he outgrew the club from California, and now he has raised the ladder to a higher level in Atlanta.

How did Bogdan actually switch from Bucks to Hawks? In fact, the most important details about the now famous, failed transfer of Bogdanović to Milwaukee are known…

Giannis Called Him, Holiday ‘Ruined’ Everything

First: Giannis Antetokounmpo really wanted Bogdan to come to the Bucks. Milwaukee, therefore, tried their best to satisfy the wish of their superstar, who by the way took the opportunity to sign a supermax contract extension afterward. Furthermore, Bogdanović and Giannis reportedly spoke to each other on a daily basis and discussed future possible cooperation.

Second: It seems that the whole deal was ruined by the Bucks trade who sent Eric Bledsoe, George Hill, and the picks for Jrue Holiday from New Orleans. And Bogdanović did not like that.

Third: In addition to the fact that Holiday’s arrival would change the possible role of Bogdanović in the Bucks, the financial conditions also changed. The exact numbers are not known, but yes, Holiday’s trade influenced the offer to Bogdanović, who in fact did not give one-hundred percent consent at any moment. There was a conversation with Giannis and Greek really wanted Bogdan to come to Milwaukee. Bogdan even talked to George Hill (they know each other from Sacramento) who called Bogdan to come to Milwaukee before the trade for Holiday happened. Then Hill himself left the team. So a feeling of disappointment was born in Bogdan. He talked to the players who persuaded him to come and thought he would play with them, and then those same players are gone far away from Milwaukee.

So Atlanta Got Bogdan, and Bogdan Got Atlanta

So, the arrival of Holiday limited the budget, but it would also change Bogdanović’s role in Milwaukee. Having already Antetokounmpo, Khris Middleton, and Holiday, it is likely that the Bucks would award Bogdanović a less significant role in the team. He probably did not want to accept that and ended up in Atlanta. It seems that the Bucks did not play fair until the end, so Bogdan turned the course towards the Hawks.

Atlanta offered Serbian shooting guard $ 72 million in four years, Sacramento had a chance to equalize the offer and keep Bogdanović, but the Kings did not do that even after 48 hours of considering. They did not do it because of the financial aspect – they wanted to keep the flexibility for the coming seasons. They saved about $ 40 million and they will have a chance to provide space for other guards in the team.

And so Atlanta got Bogdan, and Bogdan got Atlanta. And Atlanta got a place in the playoffs for the first time in 4 years. Something in the achieving of which Bogdan was a key person, a weighing pan on the scales that after recovering from the injury – after the All-Star break and in the first match of Nate McMillan as interim head coach – began to prevail in favor of the Hawks…