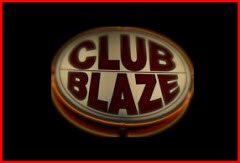 I happened to be out and about Thursday night leaving a event and decided to stop by Club Blaze while I was on that side of town.

I pulled up to the club around 1 something the parking lot was full but that ain’t saying much cause it’s also small as hell. They charge $10 dollars to park in the back and $20 to park directly in the front of the club. The door charge is also $10 dollars I think the club closes at 3am. They charge you $10 dollars to bring your camera phone in the club or they give you the option to return it to your car. When I walked in there was more dancers then patrons, I didn’t count the total amount of strippers but just guesstimating I would say about 30 total. I haven’t been at the Club Blaze Strip Club Review in like a year so I wouldn’t be able to tell you if they had any new dancers but I seen a couple familiar faces/donks. There were a lot of donks in the building, I seen one or two slimmies out out of all the strippers I seen that night. Looks wise there were a lot of 8,9 and a couple of 10’s walking around surprisingly. I walked in there with low expectations and would go back any given Thursday.

I got a couple of dances from a couple different strippers no complaints in the that area for $5 dollars a wop. The DJ wasn’t playing half the songs and the strippers gave you a bang for your buck (no pun intended). If I could compare Club Blaze to any other strip club in Atlanta you might be familiar with I would say Pin Ups. The strippers weren’t hounding you for dances and weren’t being boujee either like some other local spots. I didn’t get any drinks but they had $3 dollar drink specials. Over all the club was on some real laid back chill sheit every one minding there own biz in there own world. For all you baller’s on a budget with a $100 you could really enjoy your self at the Club Blaze. If you been to the Club Blaze let the world know what you thought about it..

Update : I originally had blue flame off bank head but it was club blaze.