“That’s not me,” protests Inga Marchand, a k a Foxy Brown, when asked whether she’s a diva.

It’s 7 p.m. And she’s three hours late to a photo shoot, accompanied by an entourage of six. They got pulled over for speeding and sweet-talked their way out of a ticket, explains her distant. Then they ran into Jay-Z and chilled for a while, says Brown’s fiancée.

And now Foxy is feeling edgy because she hasn’t eaten all day. She asks for a cheese panini, grilled salmon and a side of fresh fruit. Brown forgets about the fruit when she notices a pair of purple Louboutins she chooses to wear for the shoot.

“The Foxy character and Inga Marchand are two different people,” she continues. “My fiancé calls me Inga. No one around me calls me Foxy. I go to church every Sunday. I go to Bible study every Friday night. I’m saved.”

It wasn’t always that way.

Though her platinum-selling first album, “Ill Na Na,” made her one of Brooklyn’s most famous daughters, Foxy has lately been in the news mostly for her run-ins with the law, tangling with manicurists and posing for photo shoots in prison garb. Just this week, she appeared in Brooklyn Supreme Court to face charges of violating a restraining order and allegedly baring her bum at her neighbor.

But when the judge threw the case out, Foxy faced — for the first time in many years — a clean slate, a chance to put her legal woes behind her and trade Page Six for the music pages. Foxy Brown is ready for a comeback. What she isn’t doing is forgiving and forgetting.

“The mooning thing bothered me more than anything else in the past — because I’m a lady,”

Brown showed up in court last week with her attorneys, Salvatore Strazzullo and Ikesha Al Shabazz, ready to plead not guilty to flashing her underwear and bum last July. The defense was prepared to discredit the story by proving Brown was going commando in a tight dress that night — but the neighbor refused to testify, and the charges were thrown out.

“I’m cut from a different cloth,” she says. “I would never moon someone. I was raised in a good family.”

Brown was raised by her mother, a teacher, in Park Slope. As a teen, she was determined to live a life larger than the ones she saw unfolding around her.

“All my friends were in the park smoking weed and getting pregnant,” she says. “I didn’t want to be the young black girl having a baby, a baby’s father, being on welfare. That wasn’t going to be my story. I wanted to be a criminal-justice attorney.”

Instead, she discovered her talent for rapping.

When she was 15, her cousin, a DJ, introduced her to a still-undiscovered Jay-Z, and she rapped on his debut album, “Reasonable Doubt.”

“Jay and I are each other’s history,” she says. “We discovered each other, basically. Our first record together was what blew both of us up. We became Bonnie and Clyde.”

With her provocative curves — she’s a size 4 with a 34DD bust — and even more provocative lyrics, Foxy recorded a string of hits. She took her stage name from Pam Grier’s famous blaxploitation character and more than lived up to the cinematic Foxy’s bluster.

“Of course I want to release another album,” she says. “It’s not that I’ve been twiddling my thumbs. I’ve had major setbacks.”

In her eyes, her biggest crime is being famous while black. “The prosecutors just wanted my head,” she says.

“If Lindsay Lohan was black, she would have done two years, at least. Is there no equal standard?”

Even in a Rikers jumpsuit, she was every inch the diva.

“You’d have thought Obama was in the building when I walked in: The girls loved me,” she says. “The officers were jealous because I was getting hundreds of thousands of letters a week.”

She even shot a photo spread for a hip-hop mag while in jail.

Incarceration was easy, she says, compared to the card she already had been dealt — losing her hearing.

She says she’s still debating whether to accept Hugh Hefner’s $2 million offer to pose on the cover of Playboy.

Brown says she plans to release a long-delayed album in 2011. She is also suing New York City for $100,000 for civil-rights violations, false arrest and intentional infliction of emotional distress.

If she’s no longer the star she was in the ’90s, Brown said she’s proud of where she is today.

“I’ve never [email protected], hurt,destroyed, stolen, anything,” she says. “But I went to jail for a year. What is that? My pastor said to me the fact that I’m not living under a bridge as a crazy woman, talking to myself, is amazing.” 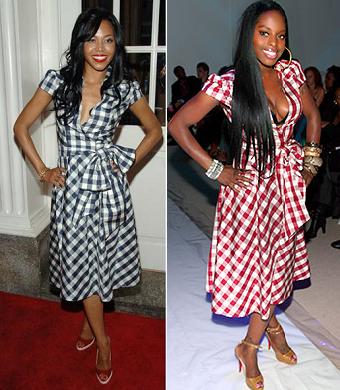